You might have heard the name TBH as one of the commonly used abbreviations, just like IMO, TBH, FOMO, and PM. These are popular acronyms that most teenagers use in social media apps, such as Instagram, Twitter or Facebook. If you are wondering what does tbh mean on Instagram, I suggest you keep reading. Also, below here, I will talk more about how the meaning of TBH changed over time and all about the tbh hashtag on Instagram.

If I want to talk about what does tbh mean on Instagram, I want to start with the point that (tbh) is the abbreviation of the phrase ‘to be honest. And as it is obvious, we can use it when we want to push someone to express the truth. But if you see that on Snapchat, Insta & TikTok posts, that can mean that the user wants to leave exaggerated praises and comments about the post. Also, some teens use tbh as a catchphrase to get their friends to make posts full of absurd compliments that have no way of being true. 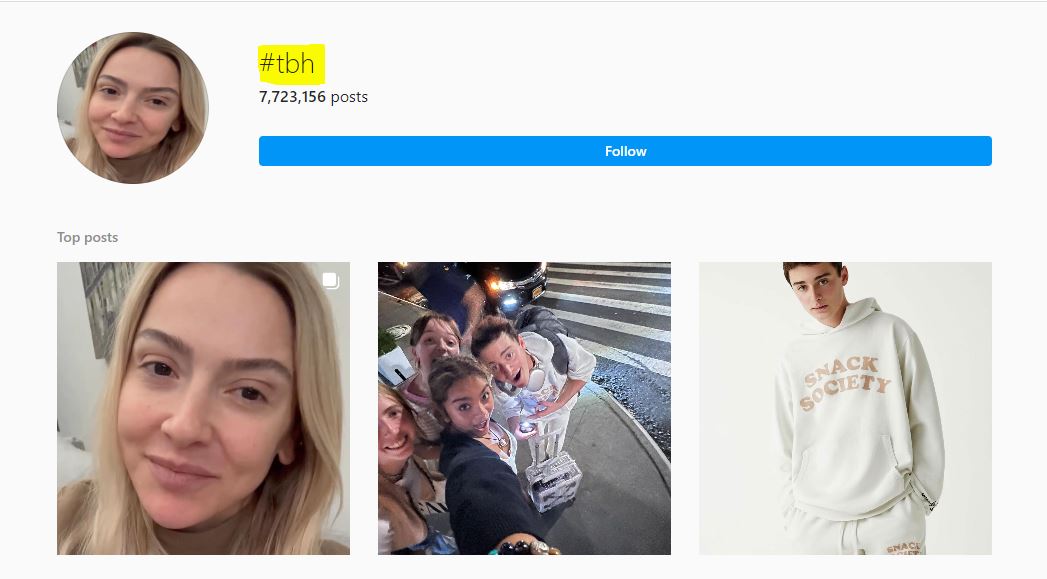 How the Meaning of TBH Changed Over Time

As I have mentioned above about “what does tbh mean on Instagram”, it was first referred to as “to be honest” but over time the TBH meaning changed, and now it can refer to other things, like:

In general, the word tbh is a common word that stands for to be Honest. You can use this word in all social media, including Facebook, Twitter, LinkedIn, and others, to give exactly the meaning and concept of being honest to your audience. So the first use of this word in social networks and Instagram is Honest, where you use the abbreviated word tbh instead.

tbh is a word that generally indicates the degree of honesty of the person who expresses it. This word is a kind of truthfulness next to the sentence you are saying. On the other hand, you can use it to break your breath in expressing some sentences. Other uses include reverse expression or its use as a form of reverse comedy.

This type of word tbh is used all over the internet. In forums, social networks, emails, and even some blog manuscripts, the acronym can be used without damaging the whole article. Words with many similarities and uses such as tbh include IMO or, in my opinion, which can also be used in most conversations.

The word tbh is used as a word on Instagram. For example, phrases same as ‘like for a tbh” I’ll give you a tbh’ are widely used on Instagram. So, using a tbh on Instagram is a little different from what we’ve said so far. In general, tbh retains its literal meaning on Instagram, but to give tbh reflects on commenting on another person’s personality or appearance on this social network.

Suppose someone writes on Instagram below their photo: like for tbh, which means that if you like this photo, you will be admired instead. If you want to use this word with the main structure, use it at the beginning of the sentence. For example: tbh I love your style The difference between tbh and tbf

There is another word like tbh on Instagram that has a very similar function to tbh. This word is tbf and is used for the to be Fair quasi-sentence. You will use tbf when you want to say a sentence fairly or judge someone or something on Instagram.

Another use of a tbh on Instagram is to add it in posts as tbh and rate. In this way, if you post on Instagram and insert the phrase tbh and rate below, you want your contacts to comment and rate their opinion. This type of tbh usage will make your audience much more honest with the audience to be more closely related to the keyword tbh.

We talked about the uses of a tbh on Instagram. Still, we have to say that using the new use of a tbh on Instagram is somehow routine among teenagers, and many of them like to use this word to get more likes or comments. Many are waiting for their crush on Instagram to respond to this tbh and comment under their pictures or videos. Words have many uses in Instagram and acronyms and are expanding. Some of these words are even trending and attract millions of posts in a year.

What does tbh mean snapchat

In Snapchat tbh also means “to be honest” and people add it to their posts if they want to show their honest thoughts about a topic.

The difference between tbh and tbf

While TBH means “to be honest”, TBF is an abbreviation used for when you want to say your point of view in an internet discussion and it means “to be fair”.

Have you ever faced TBH on Instagram or any other social media platform? If so, I might be wondering what does tbh mean on instagram. While originally this phrase was used as an abbreviation for “to be honest”, these days teenagers use it with other purposes. To Know more about the meaning of tbh, I suggest you read the above text completely.